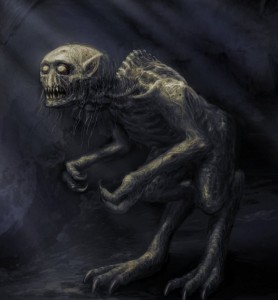 Repulsive being which die in the light… and leap on long hind legs… a pair of yellowish red eyes…  Ghasts have indeed an excellent sense of smell…  something about the size of a small horse hopped out into the grey twilight, and Carter turned sick at the aspect of what scabrous and unwholesome beast, whose fast is so curiously human despite the absence of a nose, a forehead, and other particulars…  They spoke in coughing gutturals
- H. P. Lovecraft, “The Dream Quest of Unknown Kadath.”

Ghasts are restricted to the underworld and cast caverns where sunlight never comes.  Exposed to direct sunlight, they sicken and eventually die.  Ghasts are cannibalistic and eat one another as well as other beings they catch.

The horrible semi-human bipeds which are ridden by the highly scientific but morally degenerate humans inhabiting the cavern of K’n-Yan may well be relatives of or even be examples of ghasts.  If this is the case, then ghasts are likely a result of serpent people genetic experimentation.  Ghasts are evidently tamable, though very primitive and savage.