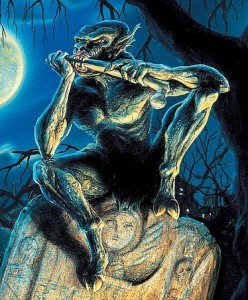 These figures were seldom completely human, but often approached humanity in varying degree.   Most of the bodies, while roughly bipedal, had a forward slumping, and a vaguely canine cast.  The texture of the majority was a kind of unpleasant rubberiness.

Ghouls are rubbery, loathsome humanoids with hoof-like feet, canine features, and claws.  They speak in what are described as gibberish and meepings.  They are often encrusted with grave mold collected as they feed.

Lovecraft’s ghouls are horrible creatures dwelling in tunnel systems beneath many cities.  They have ties to witches and occasionally attack humans.  It may be possible for a human to transform into a ghoul over a prolonged period of time.

Ghoul Attacks:  it may attack with a both claws and its bite in a single combat round. If the ghoul’s bite strikes home, then in hangs on instead  of using claw attacks and worries the victim with its fangs, continuing to do 1D4 Bite Damage automatically.  A successful STR against STR Resistance Table roll dislodges the ghoul, breaking what amounts to successful Grapple, and ending the Bite damage.

Armor:
Firearms and projectiles do half of rolled damage; round up any fraction.

Spells:
roll D100 – if the roll is higher than the ghoul’s INT, it knows no spells; if equal to or lower than INT, it knows that many spells, as chosen by the Keeper. See Spells.